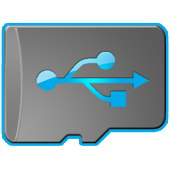 A few months back I decided to pledge $12 US to a Kickstarter Project for a miniaturised USB card reader for Android smartphones. The idea looked promising, and I had a spare $12, so I took the gamble, and this week it paid off. Through the post I received the dividend on my 'investment'. I'll follow up this mini-review with some details on performance once I can get hold of a class 10 card, but for now here are some first impressions and opinions.

The concept of USB OTG (on-the-go) storage is a good one, especially for the increasing number of us of us whose favourite phones don't have an SD card slot. However, one of the big issues with the regular arrangement for OTG is the need to carry a male-female adapter cable and a card reader or memory stick around in addition to the telephone. Doing away with this inconvenient clutter was really what attracted me to the idea of the Meenova reader.

I knew that a tiny, almost weightless device, which clips to my keyring, but which can take exchangeable micro SD cards at least up to 64Gb, would be worth $12 to me just for the convenience. The Meenova reader ticks all those boxes at around 2cm square by 8mm thick and weighing in at only 3 grammes.

The reader arrived by mail, safe in a protective envelope, direct from the manufacturing facility. US customers receive theirs via USPS, the rest of the world via Hong Kong Post. Inside the envelope the reader was neatly packaged, and the pack included the reader, a USB adapter for lap/desktop connectivity, and a keyring clip. 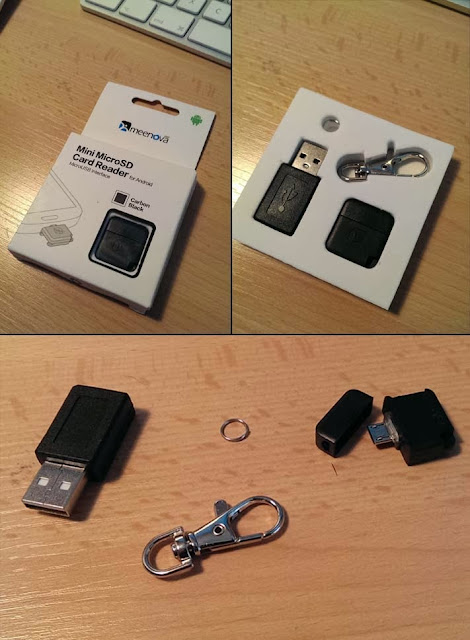 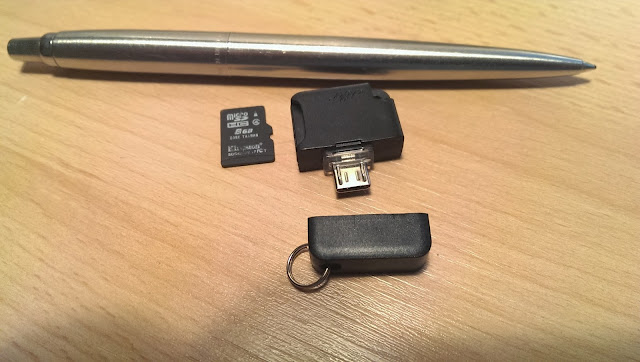 All the items were well made and well finished. The only exception was the tiny split ring for the keyring adapter, which was quite flimsy, but that was such an insignificant part of the package that I just replaced it with a better one for five cents. The cap clips onto the reader with a satisfying and tight click, and the reader is securely held.

That led me to thinking that instead of hanging the reader from my keyring, I should hang the cap from the ring and clip the reader in/out of it as I used it. I punched a small hole in the cap, threaded the tiny keyring through it, and I am very happy with the modification. 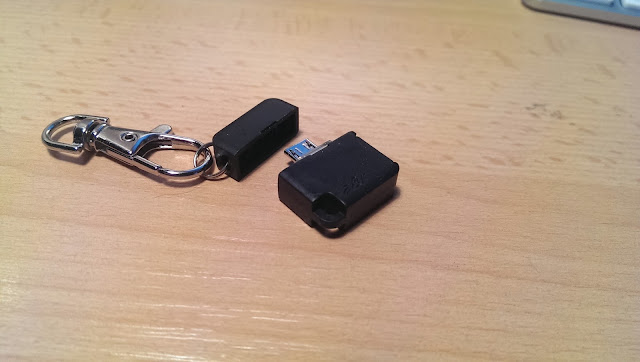 Do NOT hang the reader on your keyring as I described above. My reader came unclipped twice today and I almost lost it !! Use the tag provided on the body of the reader and pass the spring clip through that. Only use the ring to hang the cap from the clip when the reader is in use.

Getting To Grips with the Meenova

Having got it all ready to use, my next step was to rummage in the spares bin. Luckily I found an old 8Gb class 4 SD card to use for the first test. I slotted it into the reader, plugged the reader into the USB adapter and plugged all that into my trusty iMac.

Partitioning and formatting the card was quick, easy and there were no issues.  A nice touch is that USB connector on the reader is mounted in a raised, transparent, plastic "plinth" and from inside the casing a blue LED flashes to indicate any activity.

My first test was to load up my entire photo library from iPhoto to see what would happen. 2 Gb was a heavy enough load, and during the loading process I also deleted around 400 of the photos from the card during the load to see if that caused any issues. The process took a while, but there was no noticeable slowdown during the deletions and no data dropouts or corruption.

Following the successful upload I unmounted the device and plugged it into the USB port of my HTC One. The One immediately reported "Preparing USB storage, Please Wait" and then "USB storage is ready" which popped up almost too quickly for me to take the screen shots. 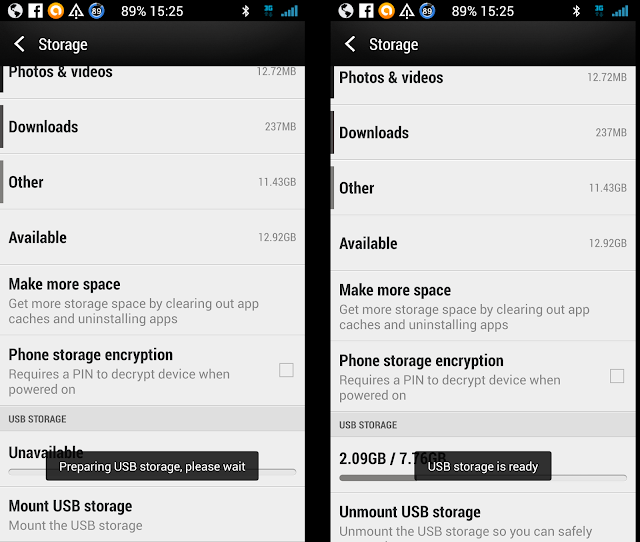 ES File Explorer, showed me that the USB was mounted automatically by the OS at the mount point /mnt/usb. On opening, Explorer already had the USB folder open and I was able to examine the contents just as I would any other part of the file system.

The next step in this little test was to open Gallery and look for the photos I uploaded. They had already been found by the Gallery app and the app was in the process of making them available. Once the photos folder had been opened in Gallery, the photos themselves did take some time to appear, but until I can get hold of a faster card I can only speculate on whether this was caused by the cheap, slow card, the reader, or the OTG/USP processing in the phone OS.

After playing with it for a while I was ready to hang the reader back on my keyring and drop my One into it's slip case ... That was the only point at which I had an issue with the setup. In my haste, I just pulled the reader out of the USB socket and immediately received the notification "USB Storage unexpectedly removed" ... 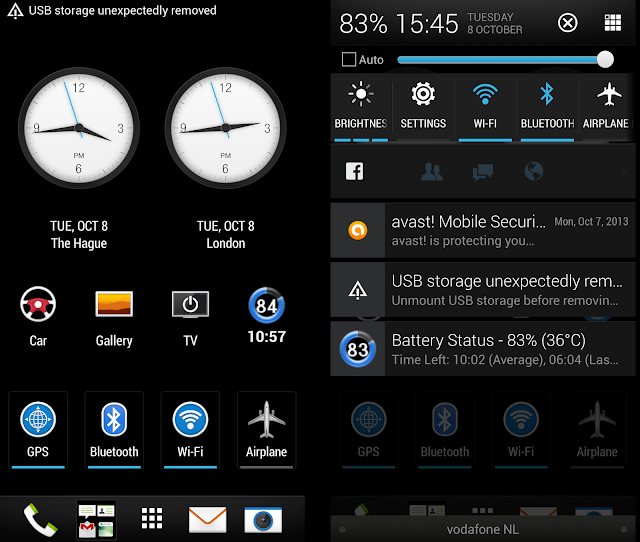 Oops ... My Bad ... I had forgotten to unmount before removal!

I was only reading from the card so on this occasion it wasn't a painful experience, but no excuses ... some cards can be very sensitive to superblock corruption so it's never a sensible thing to just pull them out without first unmounting, and definitely not advisable following a write to the card.

Just to make sure I knew what to do in future, I reinserted the reader and went in search of the unmount action. I have to admit, I was naively expecting a bar in the notifications or settings pull-down with some obvious wording such as "USB/OTG storage - Click to unmount" ...

No such luck ... I eventually found the action buried in the basement !! ... It's actually in Settings->Storage->USB Storage->Unmount USB Storage. 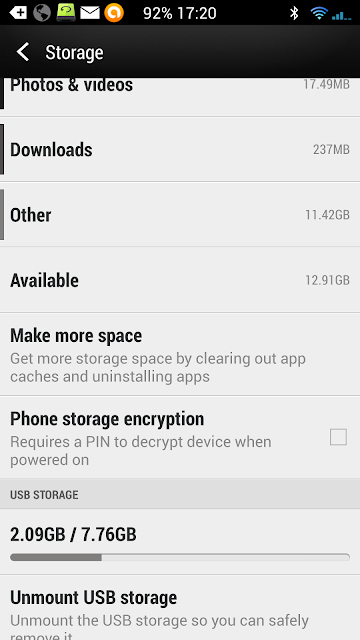 For the sake of user convenience, I think there is a good case for smartphone manufacturers to do some rethinking about where that action should be placed. In my opinion, it belongs in a much more prominent position.

Third-Party Apps and the Meenova

Because of that one thing, I went in search of an OTG/USB third-party app to see if I could make the unmount a little more convenient. I tried two (see *** footnote) and both worked well. However, both of them were designed to manage the mount and unmount themselves. That is, they are set up to create a mount point and mount to/unmount from that point. When using these apps on the HTC One, the OS native mount is maintained in addition to the ones set up by the tool, so a final unmount will still need to be done from within the settings page.

If you have a phone with an OS which automatically mounts the OTG/USB storage, then don't bother with third-party apps. Just be sure you know how to unmount the device. If, on the other hand your OS doesn't automount the storage, but you have an OTG-aware kernel, then these third party apps can make your use of OTG devices easier.

There is a list of known compatible devices on the Meenova web site, but in this rapidly changing world, the list may not be complete. In hard terms, the device is only a micro card reader, and the chipset is the same one that can be found in many regular readers, so the rule of thumb is that if your phone works with a cable and memory stick, either with native or third-party software, then the chance is good that it will work with a Meenova Reader as well.

On the general subject of OTG compatibility my advice is for you to research your phone carefully before buying anything. Not all versions of Android support OTG and manufacturer support can also very variable, even between model ranges from the same company. Don't just assume that because your phone is fairly new and your Android is 4.x then it will have OTG. Check it out.

Overall I am already satisfied with my $12 investment, and at this point I feel that I can recommend this device to anyone looking for a compact, handy, OTG/USB storage solution.

In Part Two (coming soon) I will take a closer look at the Meenova reader's performance with music and video files, and I will try to run a set of timing comparisons using Class 4 and class 10 Micro SD cards.


*** The OTG Storage managers I tested were:

As for Meenova the company, the Kickstart project seems to have been a great success. Plenty of cash was raised to get the project onto a stable footing, and I have yet to read a negative comment about either the Meenova reader or the guys who set it all up. The initial seed stock has now been dispatched to all the original backers, and the company are now taking pre-orders for the next batch of devices.
Author: radiotrib
Email ThisBlogThis!Share to TwitterShare to FacebookShare to Pinterest