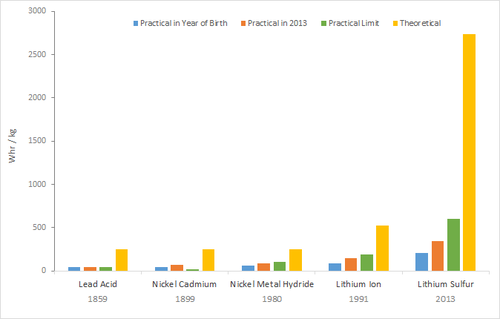 Lithium-ion batteries, the current battery technology used in smartphones, has a high specific energy (energy per weight) but has a few drawbacks. Let's take a closer look and compare both technologies.

The main issue with Li-ion is that is requires lithium dissolved in extremely volatile and flammable organic solvents; e.g. dimethoxyethane which has a low flash point -2 °C (28 °F), the temperature at which a volatile substance can evaporate and form an ignitable mixture in air. This makes them extremely dangerous when the charging circuits malfunction and fail to protect the battery from overcharging, and consequently overheating. We have seen some scary stories in the recent past with people waking up to their phone bursting into flames while they were charging overnight, and the battery fires in the new Boeing 787 Li-ion battery packs. So obviously there is need for development into a safer battery composition with similar or better energy capacities.

Recently I did some research into the developing Lithium-Sulfur battery, with extremely promising specifications at the present time better than Li-ion. Li-S is extremely light weight due to the use of sulfur instead of ionic liquids, additionally sulfur is much cheaper to produce than ionic liquids. Despite frequent headlines about new battery compositions with potentially high capacities, Li-S is actually in the production stages and no longer just a concept.

The chemistry behind Li-S is essentially the lithium gets plated onto the anode when charging and poly-sulfides are reduced and coat the anode when discharging, compared to the use of intercalated anode and cathode plates in Li-ion. This is the main factor which gives Li-S potential to be a battery composition with an extremely high specific energy. The different chemistry also allows the use of much less volatile solvents such as polyethylene glycols (flash point up to 287 °C/548 °F).

The degradation of Li-S is different to Li-ion but is also susceptible to an increased rate of degradation at high temperatures. There are unwanted side reactions that can take place, but are reversible until they dissolve into the solvent. Luckily sulfide compounds are relatively insoluble in electrolyte solutions but any increase in temperature will increase their solubility, so batteries need to be well regulated to prevent rapid charging and discharging.

Manufacturers are beginning to pour money into research and development for Li-S as there are a lot of factors which can be significantly improved, from something as simple milling smaller sulfur and carbon particles to something more difficult like developing a better solvent to improve battery capacity and reduce degradation. (Carbon nanotubes/nanofibres are used as a conductor due to sulfur’s poor electroconductivity, and they are still quite expensive to produce.)

I've put a graph at the top to compare rechargeable battery technology in the past with Li-S. Now, time to see which OEM will be implementing Li-S first.

TL;DR Lithium-Sulfur batteries are capable of having a higher wattage per weight than Lithium-ion whilst being both safer to the consumer and cheaper to manufacture.

This article is also to be found on its author's personal blog.